Evangelist Mark van Niekerk presented his testimony on evangelizing in the Middle East at Clumber Church at 10h00 on Saturday 20 October 2018. What an inspirational and soul searching talk this was. We were indeed fortunate to hear first hand the way the Spirit of God is moving amongst those who adhere to the Muslim faith. It is no exaggeration that Muslims are converting to following the risen Christ, not in tens or hundreds, but thousands!

Mark is a descendant of William Pike, who emigrated from England in 1820 with the Nottingham Party and who was a local preacher. So Mark is carrying on the Pike tradition of evangelizing.

Jon Houzet , a reporter for Talk of the Town who attended the talk, wrote this article for his newspaper on October 25 2018 :

A Heart for the Suffering People of Iraq and Syria

Missionary Mark van Niekerk related a harrowing yet hopeful tale of his evangelism work among the suffering people of Syria and Iraq, when he visited Clumber Church last Saturday.
van Niekerk, who was visiting with his wife Marie Anne, came to Clumber because he wanted to see where his ancestor, 1820 Settler William Pike was buried.
Church member, Courteney Bradfield, who introduced van Niekerk, said the restoration of the historical Church which began a couple of years ago - with an official opening ceremony almost exactly a year ago - had a purpose beyond just making the building beautiful again.
"This morning is a fulfillment of that purpose. It's one of the things the restoration was for" Bradfield said.
van Niekerk who hails from KwaZulu-Natal, said he was a farmer for about 30 years, and was a nominal Christian before both he and Marie Anne came to a deeper faith in Christ and were baptised together, studying and growing in knowledge and grace.
With a love for the Jewish people, they began visiting Israel in about 1994 and have made 30 trips there over the past 20-plus years.
He became friends with a Messianic Jewish believer, Antony Simon, who was a big influence on van Niekerk's forays into the Middle East.
"The Jewish people are going into the time of what is called Jacob's Trouble, where Jesus said "If those days were not shortened, no flesh would survive" , van Niekerk said.
"I believe we are living in a pivotal period of history. I believe we are near the time of the Lord's return. The nations are linked into Israel. The salvation of the nations is linked to the salvation of Israel".
van Niekerk said the Church has had an arrogance towards the Jewish people, feeling nothing for their pain over the past 2000 years.
He reminded the audience of the Apostle Paul's words to the gentile Church in Romans 11, that if the natural branches ( Israel) were broken off because of unbelief, God would not spare the branches that had been grafted in (Gentiles), if they did not continue in faith and kindness.
van Niekerk first accompanied Simon to minister to the Syrian refugees in Athens, handing out Bibles in 12 different languages.
Simon next encouraged van Niekerk to go with him to Iraq." He said 'your life will change' "
He went with Simon first two years ago. He described how thousands of people had been driven from the Nineveh plains by Isis, which once controlled Mosul, which is where ancient Nineveh was.
"Most of Christianity in the Middle East is cultural" van Niekerk said. " They don't know Jesus".
They were stopped from giving Bibles to people by Christian bishops.
For their next trip to Iraq, Simon told van Niekerk he had to bring another 100kg of luggage, to carry Bibles.
Just 24 hours later he received a call that his friend Simon was dead, killed in Iraq.
He thought his mission trips were over, but he felt a burden from God to continue, already having the contacts in Iraq.
He described his work among the Kurds who live in Iran, Iraq, Turkey and Syria - 40 million people who are despised in all of these countries.
He was warned by an Iraqi evangelist not to go to a certain area, but again felt the Lord calling him to go there. Marie Anne was also upset about his plans.
"People were being killed for leaving Islam. I said 'what can Christianity offer them if I'm afraid of death?'
"That step of faith opened another door into the mountains of Iran"
He accompanied a Peshmerga evangelist to Kurdish villages in the mountains. They delivered food to the widows of men who had died fighting Isis. "This is James 1 in practice" van Niekerk said.
He told story after story of Muslims being excited about getting a Bible in their own language and coming to faith in Jesus. He was invited into many homes to share the Gospel.
They also visited refugee camps in the plains.
He said they had to exercise caution about who they could speak to about the Bible, as people sometimes spied on them.
He saw places where Isis had brutally executed people.
Sometimes, it was just about showing compassion. He was introduced to an 18 year old woman who had been doused with petrol and set alight, suffering burns from her chin down.
" I just hugged her and wept" he said.
" When I see people turning to God in this way, and I see we can't get interest in the West, how much time do we have left?" 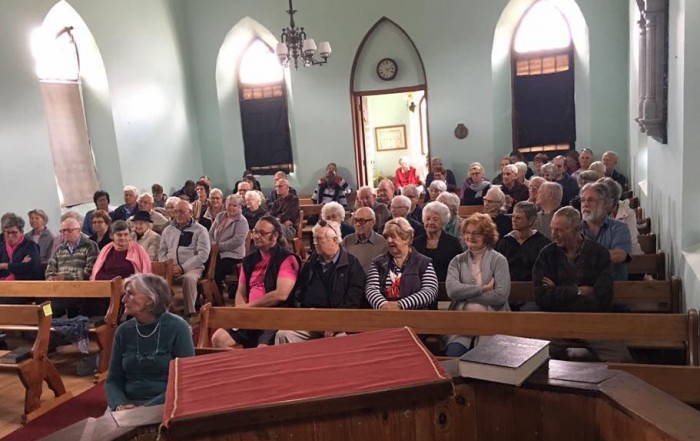