THE INTERIOR OF THE CLUMBER CHURCH BUILT IN 1867 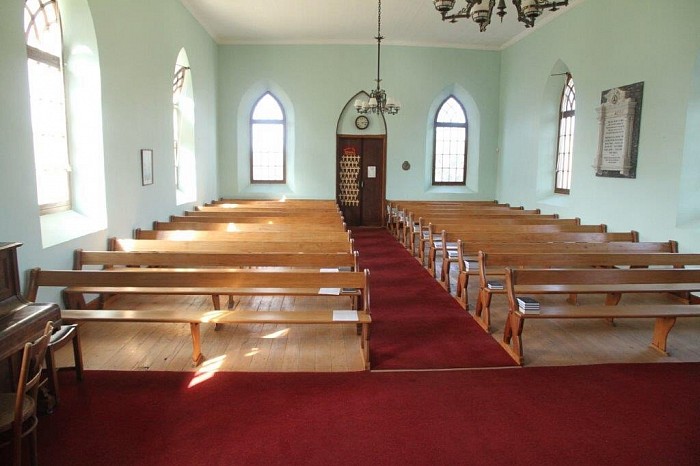 Interior of Clumber Church with it's yellowwood pews and floor

FURNISHINGS OF THE THIRD CLUMBER CHURCH

The interior is lofty and beautifully proportioned. Boasting yellowwood floors and pews it has a timeless , simple elegance. The pulpit was purchased in Grahamstown for £25 and crafted by an 1820 Settler. Four paraffin lamps plus two at the pulpit lit the church. It was opened on 10 November 1867 at a service conducted by Rev George Green and attended by about 300 people.

The harmonium, still in use , was presented to the Church in 1902 by Elizabeth Trower and her daughter Fanny in memory of their husband and father Joseph Trower, local preacher and circuit steward. Mr Sissons bore the cost of the freight of the organ from America.

We are fortunate to have another harmonium, a small traveling reed harmonium, dating from, we think, from the 1920's or 1930's. This little instrument has travelled around the district, being utilised in Church Services in remote areas and places where a musical instrument is not available. For example it has been used at the Fish River and Kleinemonde seaside resorts where the Christmas Services are held in the open, under trees.

Another musical instrument, the piano, is a sought after Gors and Kallmann built on 21 January 1902. There is a church record of a piano being bought a few years later for £28 for use in The Clumber Hall which has now been demolished. This piano was then moved to the Church. Last tuned in 1982, this piano was totally refurbished on 29 November 2016.

The current lighting , two beautiful chandeliers, was discovered in storage under the stage of The Hall and converted for electricity by Harvey Pike and Jimmy Richardson in 1967.

The Communion Table was donated by the Woman's Auxilliary on 10 November 1967 on the occasion of the Centenary of the Church. The Central Cross was made by Kethe Bradfield from a broken yellowwood pew also at this time.

Teak was used for the soaring Window frames and the 4 Porch doors.

The 4 teak doors as well the yellowwood floors and their sneezewood joists, the yellowwood pews and the pulpit, the ceiling and ventilation vent cover, as well as the roof trusses and teak windows are all original features which were incorporated into the furnishings of Clumber Church in 1867. 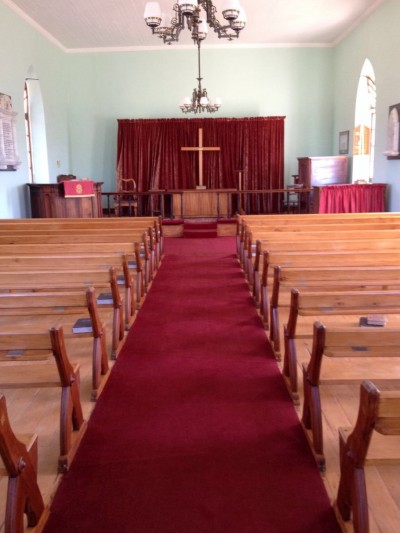 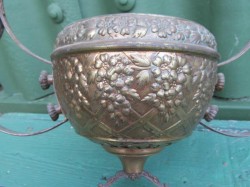 Lower Bowl of the Miller Oil Lamp in the Porch 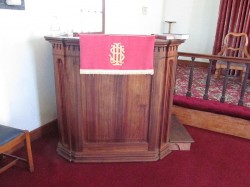 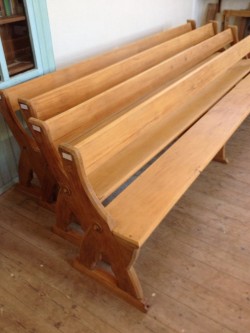 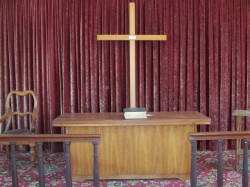 Communion Table and Central Cross from 1967 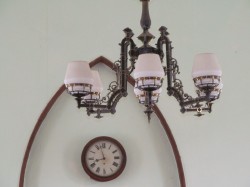 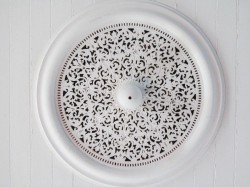 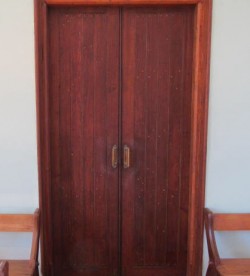 The Teak Doors leading to the Porch 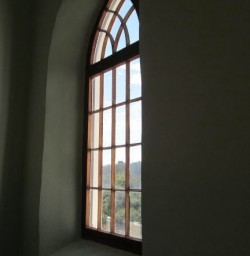 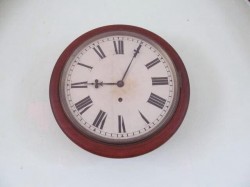 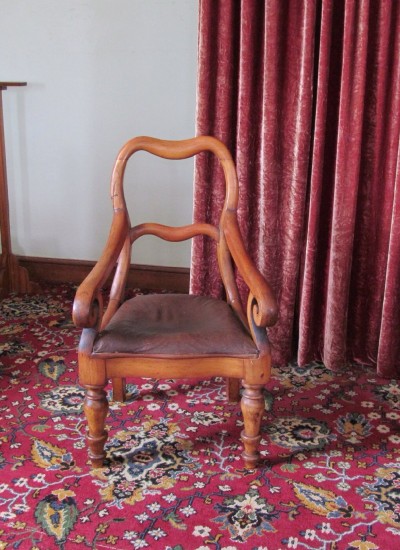 This Cape Stinkwood chair with a leather seat and beautifully turned legs is from the early 1800's and was originally part of a set. Considered a male chair as the female variety had no sides to accommodate the voluminous skirts of the time. The likely carpenter was craftsman J.J.Preiss Robertson as the curved back is indicative of a master craftsman's work. 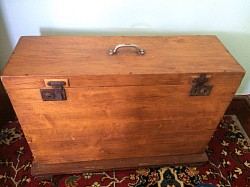 The portable harmonium in its traveling case 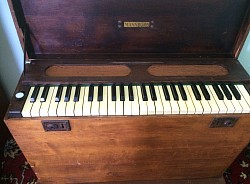 Being unpacked, the travelling harmonium reveals its keyboard 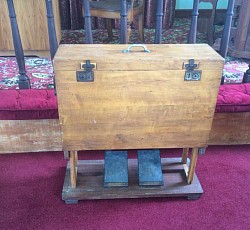 The travelling harmonium ready for use 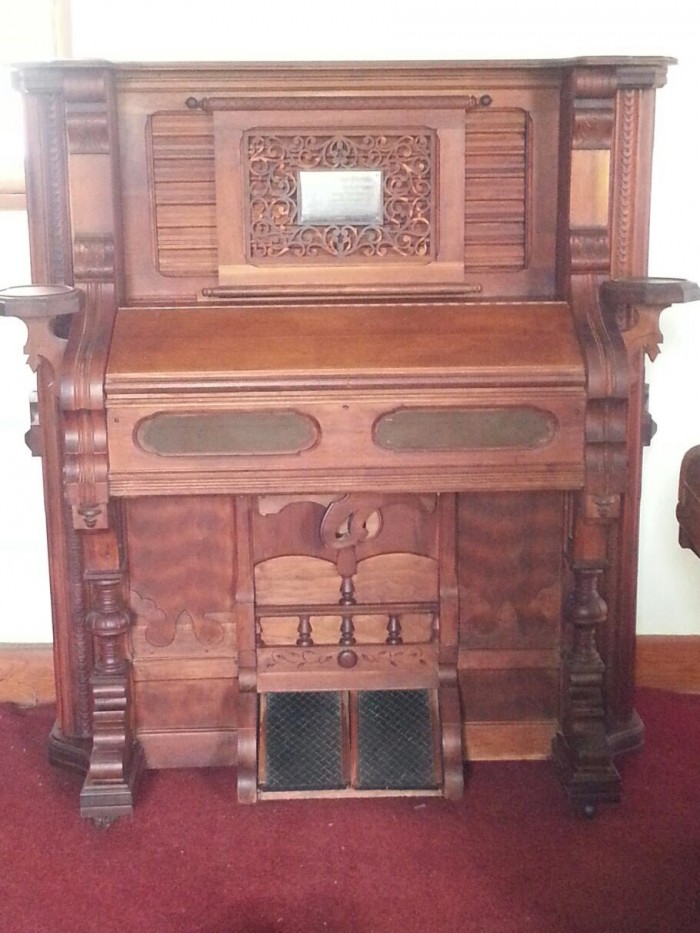 The Magnificent American Pedal Harmonium of 1902

THE MUSICIANS OF CLUMBER CHURCH

Remarkably, over the last 115 years, there have been only 3 organists at Clumber Church. From 1902 to 1944 Mrs Hedley Purdon ( born Ethel Sophia Bradfield Timm) , 1944 to 1980 Mrs Constance (Connie) Long and from 1981 to 2017 Mrs Olive Pike. The current organist is Frans Volschenk who is also organist at Rokeby Park country Church. The Silver Plaque on the Harmonium pictured above reads : "Presented to the Wesleyan Church Clumber by Mrs Elizabeth and Miss Fanny Trower in loving memory of their husband and father Mr Joseph Trower for a long period of years an efficient class leader, local preacher and circuit steward in the Bathurst Circuit. 1902".

So Mrs Hedley Purdon was the first to assume responsibility as organist on the Harmonium donated in 1902 . 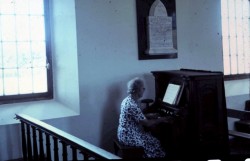 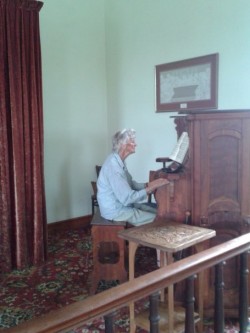 Olive Pike. From 1980 to 2018
Made with SimDif
Courteney George Bradfield