THE THIRD AND CURRENT CHURCH OF 1867 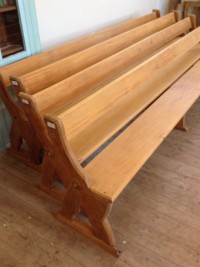 Because of the increase in congregation numbers in the mid 1800's, and it being impossible to expand an already dilapidated Church, the erection of a new Church, the third, had to be considered. In July 1860, with the Rev Purdon Smailes in the Chair, Thomas Cockroft moved and Joseph Kidson seconded that a new Church, 45 ft by 20 ft, be built. Plans and preparations for the new Church in the years that followed culminated at a Service officiated by Rev George Green on 11 July 1866, when George Wood, M.L.C., laid the foundation stone for this Church. Plans and specifications for the building were offered voluntarily by George Jarvis, a draughtsman from Port Alfred. The Church was to have three windows on each side, stone walls of 14 feet high and a slate roof. In August 1866 it was resolved that a Porch of 10ft by 6 ft be included in the plan, and that the joists be of sneezewood. In September 1866 the wall height was increased to 16 ft and a Steeple was to be incorporated in the plans. Brislin & Mack tendered £162-15-0 for the masonry, plastering and materials and an extra £2-5-0 for the increased height of the walls. Charles Poulton junior tendered £90, including materials,for carpentry of the roof, floor, ceiling, doors and windows on August 8 1866. In November 1866 Charles Poulton's tender of 2s/6d each for the making of the yellowwood pews was accepted. The style was to be copied from those of St Bartholomew's Church in Grahamstown. The 4500 "Countess Style" roofing slates were purchased from A. Stewart of Port Elizabeth, at £10 per thousand. In July 1867 a Pulpit made by a Settler and formerly used in the Grahamstown Wesley Chapel was purchased for £25. In August 1867 the builders had completed the masonry with the stone quarried by William Whittaker. At an October meeting it was agreed that four paraffin lamps with reflectors and two for the Pulpit were to be used for lighting and these were supplied by Mr Parker of Grahamstown the following month. The Church,which cost £800, and built by Charles Brislin, was  officially opened on 5 November 1867.In June 1916 there were plans to extend the Church and £350 was offered by Henry Staples to meet the cost of erecting a Vestry. J. Benyon's tender of £320 for this work was accepted in September 1916. 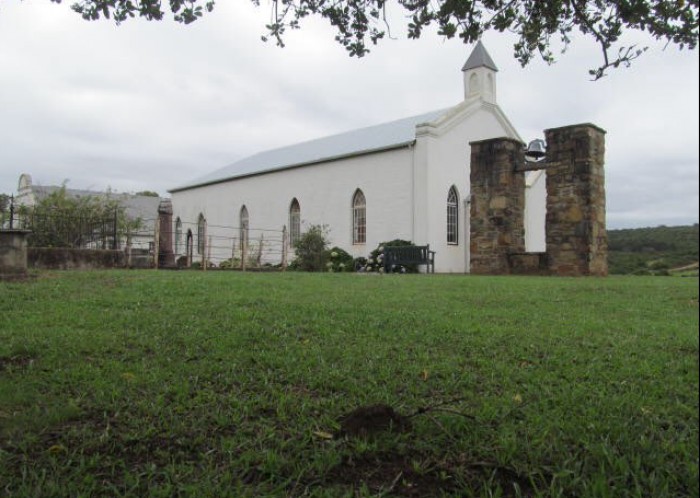