In line with the Government's directive that South African citizens are to go into isolation, all activities at Clumber will cease forthwith. This includes Church Services and guided visits.

The existing Clumber Church of 1867 was preceded by two Churches, all built on Mount Mercy.

The first was built in 1825, a mere 5 years after the arrival of the Nottingham Party. This Church was entered by the invaders in the Sixth Frontier War when the entire area was evacuated.

The second was built in 1837 and endured depredations during 2 Frontier Wars. In the Eighth Frontier War the Church was used as a Command Station instead of evacuating the area as was the case in The Sixth Frontier War.

Standing atop a knoll in the vale of Clumber, named Mount Mercy by the Nottingham Party of the British Settlers to South Africa in 1820, is the Clumber Church, the third Church the 1820 Settlers  and their descendants built at this spot, and opened on 10 November 1867. Still in use today with a Service held on the fourth Sunday of the month at 11h00, the Clumber Church faces difficult times due to the depopulation of the countryside. Once a thriving social gathering place, it boasted a school, teachers' home, manse, a hall used for social occasions as well as Sunday School teaching, a cricket field, tennis courts and clubhouse. Now all that remains is the Church opened in 1867, and the school building; dating from 1905. Both the School and the Church were declared National Monuments on 23 November 1980. GPS Coordinates: S 33 deg 27'04.299 E 26 deg 51'08.965 https://g.co/kgs/x2aZM3. From Port Alfred travel on the R67 to Bathurst. Continue from Bathurst for 3km on the R67 to Grahamstown. Clumber Church road signs will direct you where to turn right onto the Shaw Park Road. Continue for 2 KM and turn left to Martindale, again the Clumber Church directional road sign will guide you. 1 KM from this turn off, at the bottom of the hill, lies Clumber Church, on the right.

A KNOLL IN THE CLUMBER VALLEY

Mount Mercy is a small hill situated in a valley between Bathurst and Grahamstown in the Eastern Cape. This knoll has been central to the Nottingham Party of 1820 Settlers and the subsequent Clumber Community as a place of gathering, schooling and worship. And it was here, at the foot of Mount Mercy, on July 25 1820, that the Nottingham Party offloaded their belongings from the wagons and carts that had transported them on their journey from Algoa Bay. The last leg of their long journey which had seen them leave Nottingham and board the vessel Albury in Liverpool in mid January 1820. Their final destination in a land which for them meant new beginnings.

Mount Mercy Resounded with Music during the

The Heritage Buildings on the Clumber Precinct

The Clumber Church and Clumber School on the Clumber Precinct were proclaimed National Monuments on 23 November 1980. The South African Heritage Resource Agency which has superseded this organisation has granted this Complex Heritage status.SAHRA Site Identification:29463 SAHRA Identifier Number : 9/2/009/0014 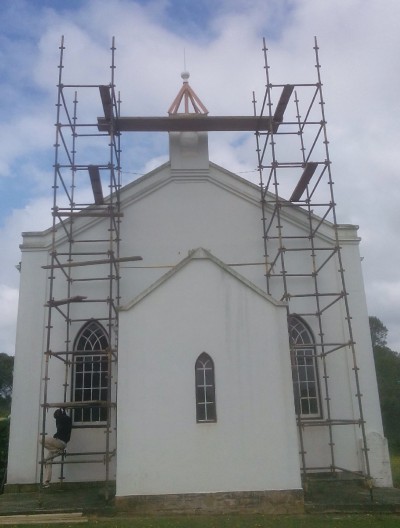 THE STEEPLE IS DISMANTLED, REPAIRED AND FINALLY INSTALLED

This website also details the extensive repairs and renovations the Clumber Church and Clumber School buildings have undergone since the end of 2015. Whilst the Church's restoration was complete by the time of the 150th Celebrations in 2017, this was not the motivation behind the restoration. It was simply that the buildings had fallen into disrepair and the Clumber Community was determined to reverse the obvious decay.
Made on my iPad
Courteney George Bradfield