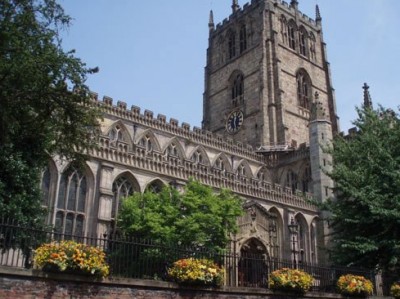 Many People in England were Starving and there was Political Upheaval

Nottinghamshire, and Nottingham in particular, was one of the areas worst hit by the Industrial Revolution and the effects of the end of the Napoleonic Wars and the collapse of the American market. This was a Centre where cottage industries such as lace and hosiery making, flourished. These home industries could not compete on costs with the new factories and so all these cottage industries shut down, putting thousands out of work. Families were starving and the people looked to the councillors of the town for financial assistance. Nottingham simply could not afford such massive amounts of support for the poor. There were riots and considerable social unrest. By August 1819 there were daily processions of protest.

In the same month the unemployed people wrote an appeal to the Lord Lieutenant and the gentry and noblemen of the county in which they stated:

"From the various and low prices given by our employers, we have not, after working from sixteen to eighteen hours per day, been able to earn more than from four to six shillings per week, to maintain our wives and families upon, to pay taxes, house rent, &c., which has driven us to the necessity of applying for parochial aid,which after all has not in many instances left us sufficient to supply the calls of nature, even with the most parsimonious economy; and though we have substituted meal and water, for potatoes and salt, for that more wholesome food an Englishman's table used to abound with,we have repeatedly retired, after a hard day's labour, and been under the necessity of putting our children supperless to bed, to stifle the cries of hunger : nor think that we would give this picture too high a  colouring,when we can most solemnly declare, that for the last eighteen months we have scarcely known what it is to be free from the pangs of hunger."

The pitiful conditions families found themselves in, resulted on 16 August in a Protest March of some 5000 men. The town's authorities were so fearful of trouble that they called in troops. Four companies of the 52nd Regiment of Foot took possession of Bromley House and several wagon loads of ammunition and stores were brought in. Memories of the Peterloo Massacre in Manchester in August 1819, where troops charged into a crowd, estimated to be some 60 000 strong, with their sabres drawn, leaving bodies of men, women and children in their wake, was fresh in the authorities minds. This protest in Nottingham raised the spectre of another Manchester protest march and the dire results coming from that. Women carried signs with the words " Pity our Distress!" "We ask for Bread ", "Pity our Children ".

There was also considerable dissatisfaction with the political and electoral system in England where the ordinary folk were denied voting rights. Voting was the preserve of the gentry and wealthy landowners who manipulated the markets and drove up prices . Bread, for example, was so expensive that,  although it was a staple commodity, it was beyond the reach of most.

So, when the opportunity of emigration arose many reached out to the lifeline presented to them. The majority that applied to join the Nottingham Party were out of work and destitute, totally in line with the Duke of Newcastle's proposal that the unemployed of the County should be encouraged to join the countrywide emigration plan. Only one man paid for his deposit, Thomas Webster.  This Party was among 4 of the total of 61 Emigration Parties of 1820 that consisted of the poor.  Parishes attempted to raise funds but they were not allowed to use money from the "poor relief" to pay the deposits for their members. The Duke of Newcastle lobbied wealthy patrons and got sponsorship for the Party. Some £3000 was collected and the most notable contributions were:

£150 The Dowager Duchess of Newcastle

A Colonization Committee was raised and comprised the following persons :

George Dennison, Recorder, a half pay Chelsea Pensioner from the 79th Foot. He and and his wife Hannah and 4 children accompanied the Nottingham Party to The Cape of Good Hope.

The Nottingham Party was one of the last in the country to be accepted by Earl Bathurst, the Colonial Secretary. The original plan was for 300 settlers, but only 164 travelled. Over 700 persons are known to have applied with later applicants still being accepted just prior to actual embarkation. An analysis of these applicants reveals a pattern of distress in the County centered on the demise of the framework knitting industry.

The majority of the applicants originated from the Borough of Nottingham which was a concern to Rev Becher who, in a letter to E S Godfrey, asked that other Parishes in the County be considered to redress this imbalance.

The application for emigration of John Bradfield, his wife Mary, and their children reveals that the letter was written on 27 October 1819. Only 2 1/2 months later they had moved out of their home, packed those possessions they could comfortably carry, and left the life they had known behind them.

Dennison, as recorder, tried to keep abreast of the ever changing make up of the party and on 12 December 1819 he forwarded to Godfrey a list of 180 names of "persons desirous to Emigrate to the Cape of Good Hope".

* John Bradfield, his wife Mary, and their 7 children emigrated to the Cape Colony as part of the Nottingham Party of 1820 Settlers 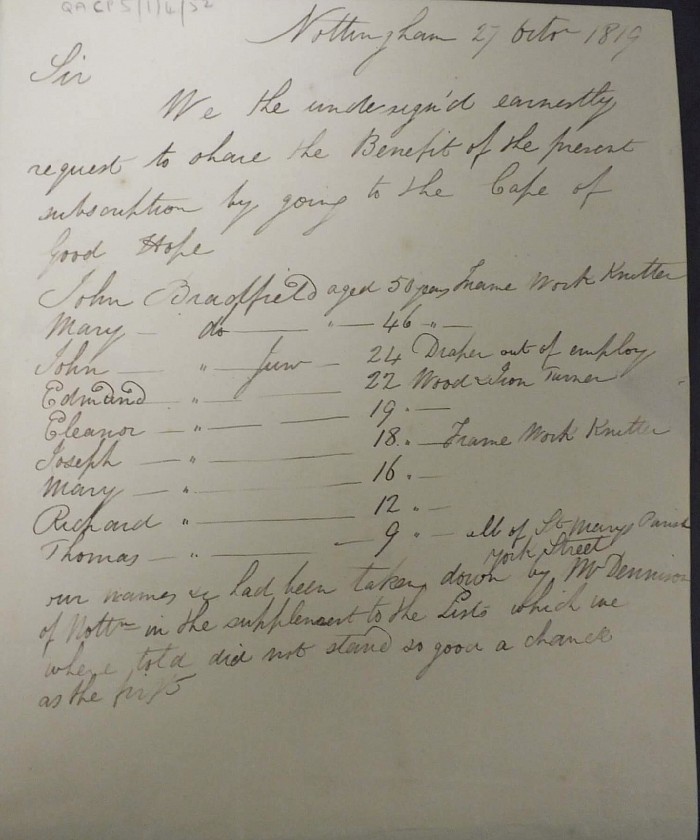 The Nottingham Party had to sign a document, called "Articles of Agreement", upon approval of joining the Party, outlining policies covering all aspects of relocation from England to the Cape Colony. All married men, as heads of their respective families, and males above 18 years of age, were called upon to sign. Matters such as finance, severing the ties of their respective parishes, what was expected of them in building up their locations in the Cape Colony; were all outlined in this comprehensive document. 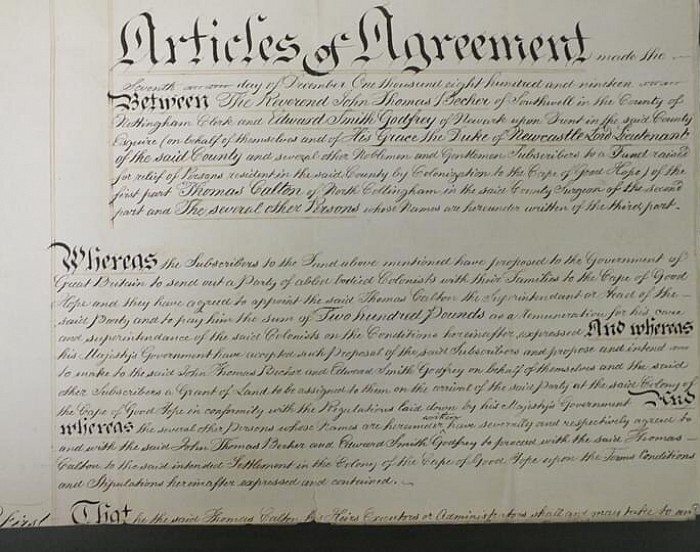 Agreement between the members of the Nottingham Party and Government 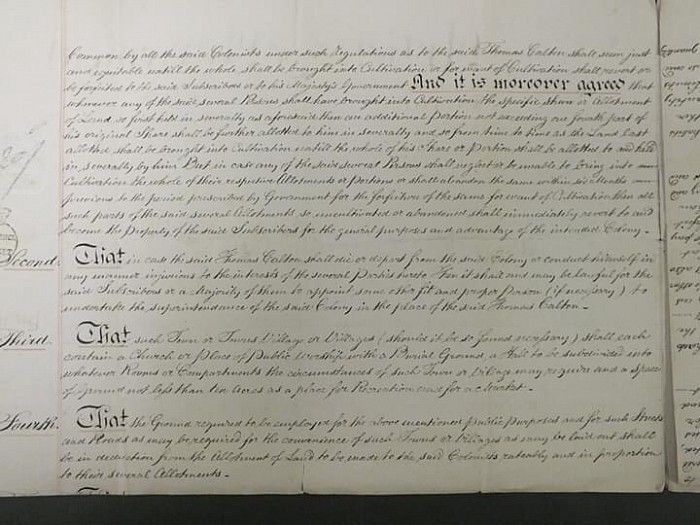 Content of Articles of Agreement between Government and Nottingham Party 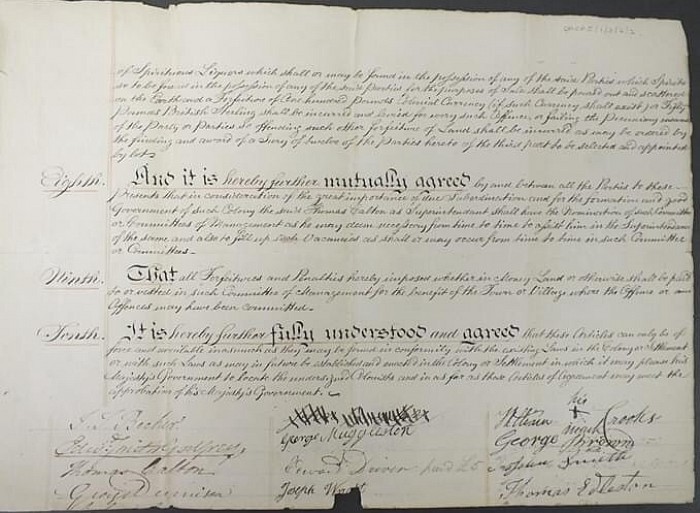 Articles of Agreement between Government and Nottingham Party 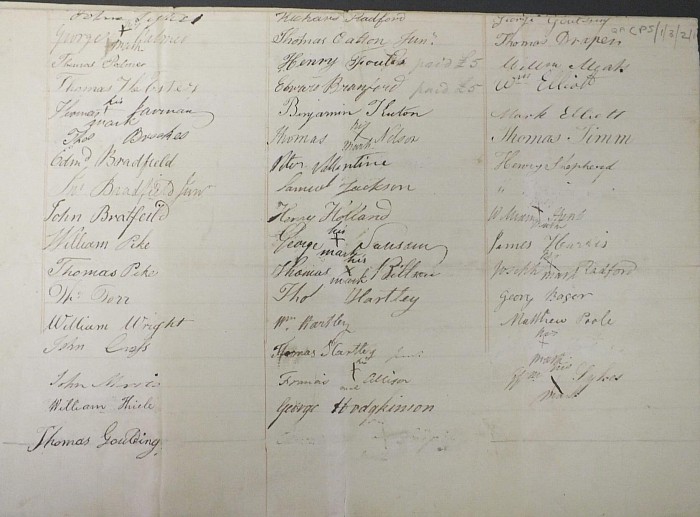 THE TRANSCRIBED "ARTICLES OF AGREEMENT" SIGNED BY THE NOTTINGHAM PARTY